So I guess I'm an extremist because I'm a capitalist. I believe in a free market, the right to bare arms, and freedom of choice, and I'm pro-life, but I guess I should take my fellow extremists, the founding fathers, and leave.

So I went to the Tax Day Tea Party at the Arizona Capitol Building in Phoenix yesterday and it was amazing! 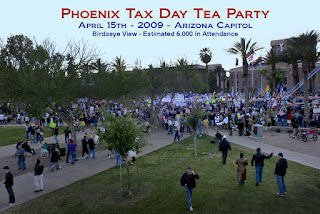 There was a reported 10,000 people there and there was speaker after speaker and each person had a unique message that got the people cheering. They covered everything from housing and inheritance taxes, nationalizing health care and the right to bare arms. These were all briefly mentioned, but the main focus, and most of the speakers spoke on different angels of how the government is overspending money they don't have and bailing out freeloaders and failed businesses and how doing this is going to put our children and children's children in the hole trillions of dollars. A common theme on the posters were pictures of children with captions such as, "It's not my debt!" or "Punish your own grand kids!" I even saw a few young kids holding signs saying "Keep your hands out of my piggy bank." There were a lot of signs in the shapes of pigs for lots of reasons.

There was a little bit of attacking Obama, but very little. It was the issues. People spoke about how the government runs out of money and starts to spend ours and says they're giving us tax breaks and we all fall for it and forget to actually think about this because money doesn't have value just because Obama printed it. We WILL have to pay for it. At any rate... Here is a link to a bunch of pictures of the event: Phoenix Tea Party Pics

And here are some of my own:
Of course I had to be goofy... 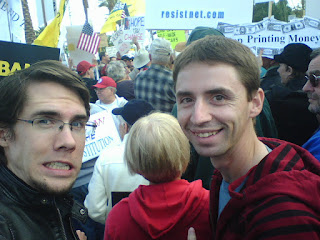 You may think the trees grew there, but they actually came for the protest too. 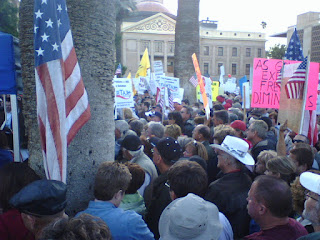 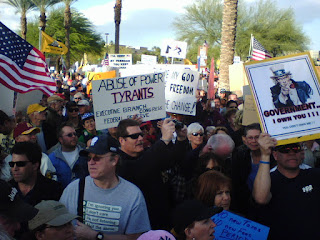 The closest blue tent is were the speakers were. We got even closer than this once people started to get all cost and close togeter. 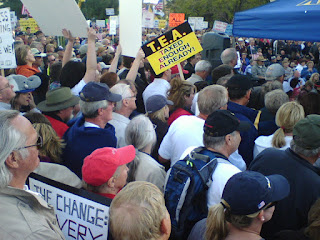 Let me know if you hear of anything like this happening in the future and I'll do the same for you. I would love to get more involved. I want to be a Right Wing Extremist Activist!